Oh the fickle Texas weather! It is wrecking havoc with my nerves and muscles, not to mention giving me some wicked migraines. But at least we only shut down for a day unlike Atlanta! 🙂 Very soon the delicious warm spring will be here. Aaaaah warm sunny days!

This sort of weather makes it a great time to talk about rue. Rue is a plant not well known outside gardening circles usually, and sometimes not even known at all since it isn’t the prettiest of plants, and it has lost some popularity in modern times. Ruta graveolens has yellow flowers and seemingly unassuming blueish green leaves, and tends to be better known in its Mediterranean homelands. Rue is still eaten in salads in Italy, Ethiopia, and Greeks were well known for using it in culinary ways, as well as medicinal. Though it seems unassuming this little plant has a lot of uses, and I suggest not passing it by! 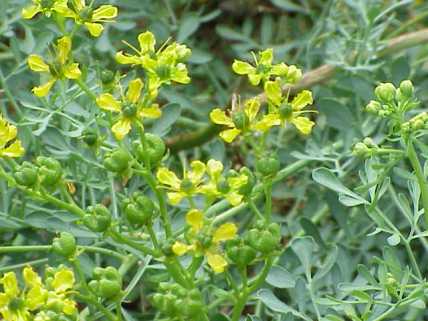 If you skip it you will rue the day, see what I did there! 😉

Many of the Greeks believe that rue is a charm against magic, and ate it at meals with strangers so they wouldn’t get cursed, or as we would say – get wind. Aristotle mentions he thinks this is absolute rubbish, and that the Greeks just didn’t like strangers, ate too fast, and got wind that way. Pliny says, or is said to say, that it improves poor, or over-strained eyesight, and this is why it was consumed by painters. Michelangelo and Leonardo da Vinci were supposed to be some of its more famous consumers, this is questionable though and may be just historical hear-say. Many cultures also used it to treat strained eyesight, and is really quite soothing when applied to the forehead for eyestrain headaches, or tension headaches.

In the Middle Ages this was another bittering herb that was used to add that bitter note to beers before hops became popular. Many of the other uses of rue in the Middle Ages were, like the Greeks, for warding off, or working witchcraft. But it was thought to ward off plague, and for this it is part of the Four Thieves vinegar, and is featured in many other plague preparations. It possibly got this witchy tradition has carried down from the Greeks, but also possibly came from its rather pungent smell that can be unpleasant to some and bad smells were thought to drive certain spirits away. I find it has a smell much like citronella, and works great in a garden to ward off deer, cats, and other unwanted garden guests. Like many plants it has multiple “vulgar” names, it is known as rue, common rue, and herb of grace. It probably got its herb of grace name from being used to sprinkle holy water during the Roman Catholic ceremony of Asperges. After it crossed the Atlantic to the New World, it became used in spiritual cleansing and sweeping away of “negative vibrations” in the Catholic influenced Latin American shamans called curanderos. Its leaves are thought to have inspired the clubs suit symbol in modern playing cards, which originated in France, and its shape even graces the coat of arms of Saxony.

Its young shoots are quite good in a salad. But harvesting is difficult, this herb that seems so mild actually has a rather effective defense. Cutting into this plant releases its sap, which has the fascinating ability to cause almost poison ivy like symptoms if it is exposed to sunlight (well technically ultraviolet light) while on your skin. This ability has the fancy name of phytophotodermatitis (phyto – plant, photo – light, dermatitis – disease of the skin), if you are going to grow and harvest your own be sure to treat rue like a citrus tree. Wear long sleeves, gloves, and use soap and water, and dark spaces to treat if any sap gets on the skin. If you choose to use fresh in a remedy, be careful and test for allergic reactions first.

It is that bitter note of rue that is what makes it good medicine, it contains rutin which is an anti-inflammatory chemical. This is probably where its early association for the treatment of sciatica pain came from. Rue can be applied as a compress to painful areas, and can alleviate swelling in sore muscles. It also contains pretty high levels of coumarin, which we discussed in the cinnamon post, and other chemical compounds that make it great for relieving nerve and muscle pain, as well as reducing inflammation.

Steep in the boiling water for 5-10 minutes, and allow to cool enough to be comfortable to apply to the skin. Soak the towel, or a rag, in the liquid and apply to painful area. Traditionally this is used to treat sciatica pain, and sometimes eyestrain, but it can also be applied to swollen areas, painful muscles, or areas of nerve pain. It works great for treating these pains, and the smell can be rather relaxing for some people. It is kind of musty smelling, but some people like it a lot. If you use fresh rue, do a test patch first to make sure it wont irritate your skin. Again, this is a great forehead compress for tension headaches, headaches from eyestrain, or just generally overtired eyes.

Mix well and store in a container that prevents light exposure. Massage directly into painful area for muscle relaxation, sleep, and stress relief. This is a great massage oil to alleviate pain and discomfort right before bed time, and the valerian and lavender in the RutaVaLa will help to bring sleep quickly. There is a Roll-On version that is already diluted that is good for an on the go solution.

Like skullcap, rue quickly runs over into the toxic levels if you add too much to internal preparations. For this reason I suggest avoiding taking rue in teas or tinctures, even if you prepare them yourself. If you absolutely want to use rue internally I recommend 2 things. First, never more than 1 teaspoon of rue per 8 oz of water, and do not take more than 1 time every 8 hours. Second, consult an herbalist, and a physician, for advice and approval of your use of rue internally. Otherwise I would suggest, most of the time, using external preparations for pain and inflammation.

Now that said, I do recommend cooking with rue. You still must stick to the sparing use rules you would in herbal medicine but the amounts combined with heat of cooking (or heat from friction in a blender) will help to break down some of the more noxious chemicals that cause so much worry.

Add garlic, herbs, cheese, and celery into a food processor (or sturdy blender) and start to puree. Mix the oil, wine and vinegar in a measuring cup, or easy to pour from vessel, and drizzle in slowly. You will want to see a smooth evenly mixed paste form. You may need to scrape the sides down of the processor a few times. Serve with additional drizzle of olive oil on top with a sprinkle of salt and pepper. This goes great with crackers, pita bread, or just with some crusty bread to dip in it. Since cilantro is hated by some people you can substitute parsley or even sage for it in this dish. If you want to be sure your rue is safe, you can quickly blanch them and sprinkle with salt to help break things down further, and rid it of some of its bitterness. This is one of those dishes you can eat when you have gotten tired of other ant-inflammatory foods, since food is the best way to take your medicine!

Whisk eggs and milk together until creamy yellow in color. Add in herbs and wisk to combine. In a heated skillet with oil or butter melted, pour in egg mixture and rotate pan ensuring that the egg coats the whole bottom of the pan. Once the bottom has cooked, tilt the pan forward and roll furthest corner over, tilt again and roll center over, creating the triple fold. Cook until egg is firm, garnish with additional parsley if desired. Again you can use salted, blanched rue leaves for this too.

I can not stress enough to treat this herb with respect and care, as you should all herbal medicines. Anything can become a poison if taken in the wrong amounts. So do your research, do your own trials since everyone reacts differently, and make sure to educate yourself. Remember no one will do it for you! As always make sure you check WebMD for interactions and if you have the slightest doubt, ask a professional!

There is a great list of rue recipes here, and they have a great recipe for a Rue Mead, better known as English Sack. I highly recommend you trying one of them.