Graston technique is mentioned quite a bit here and I am sure a lot of you are wondering what exactly Graston is. Graston technique was something completely new and unheard of to me a little over a year and a half a go, but it has been a large part of my pain treatment process and has really helped me regain and retain range of motion, and has reduced my over all pain levels significantly.

Graston was developed by an athlete who suffered a knee injury and, like myself, grew frustrated at the available pain management options. After the technique was studied and tested in Indiana Universities a clinic opened in 1994 and began offering the technique to patients. If you are familiar with cupping, Graston is a similar concept in that it draws blood to injured areas. Graston helps to deal with muscle spasms and break up scar tissue as well though, which can cause a lot of pain and other issues. So instead of drawing blood to that area with a cup and vacuum, it is drawn by scraping from a metal, or plastic, tool.

Graston tools in stainless steel, not as scary to have used on you as you would first think

The scraping draws the blood to the injury as it breaks up adhesion and scar tissue, which can form with some injuries, and spasms. It can be painful as the adhesions, effectively fuse the muscles fibers together, but the relief once they are broken up is well worth the discomfort. You can see how it looks and the difference it makes in range of motion in this video –

I remember when I was first referred by my pain doctor to start using Graston, I was extremely skeptical when my chiropractor told me it would be about 3 weeks and I would feel better. I had been doing massage, physical therapy for years and almost a year’s worth of injections and was still using my cane and only had limited range of motion. After the first week, I felt like this might have something to it. Second week, I was a full blown believer, and by the third week I was feeling better than I had in years. My cane is now a thing of the past, and while I do occasionally need some “touch up” work on my lower back it is almost completely pain free. We are now attacking my shoulders and neck, and this has even brought about significant relief for my migraines which are much less frequent, and this is much less painful (not to mention less dangerous) than having Botox injections to deal with the migraines.

There are two things that can be off putting about it, and that is it causes bruises and while scraping there can be sounds. The sounds, once you get used to it, are quite good sounds, since it means stuff is breaking up. But when you first hear the scraping turn from mostly silent to sounding like walking on gravel, it can be a bit disconcerting. The other is the bruises, and it is more having to explain them that is more annoying than going through a sitting of Graston. I have had to explain to many nurses that no, there is nothing I need to talk about and yes, I am fine. I also have to remember to not wear shirts that show the bruises or you will sometimes get approached in public, and asked questions that sometimes take a while to explain. Or some people will give any male you are talking to the dirtiest of looks. But after seeing how much I bruise, since I bruise like a peach anyway, you can understand how people can assume the worst. 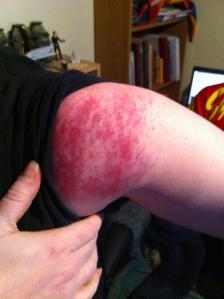 As you can see, it looks “intense” and yes, those are X-Files toys on the shelf behind me.

Remember this should only be done by a certified Graston professional, and you should definitely interview them before going to them regularly. If they don’t scrape hard enough it isn’t going to work as well or as fast, so don’t look for a soft hand.

Graston should be used in concert with physical therapy (or regular stretching and exercise), massage, and your other pain management routines. Do some research on what and who is available in your area, who is covered by your insurance and so on. Talk to your doctors and make sure this is a right choice of treatment for you!

If you are in the Austin area I highly recommend seeing Dr Alton, for information go here.

I am a Texan and in 2008 I was struck by an SUV while riding my bicycle, I have had C5-C6 and L4-S1 fused. While the surgery did a lot, I was left with Failed Back Syndrome and CRPS. I refuse to sit by and not have a hand in my own recovery, so, this blog documents my trials with finding natural solutions for chronic pain.

2 thoughts on “What is this Graston thing?”